Graveley Ranch near Avon, Montana, west of Helena on Highway 12.

Beaverslides were invented in 1908 near Wisdom, Beaverhead County, Montana, and patent granted in 1910, by brothers-in-law Herb Armitage and David J. Stephens, ranchers on what is known locally as the Sunny Slope, near Briston, a town long since disappeared. The only remnant of that town are the fallen-down logs of the old schoolhouse.

The question is always asked how the name Beaverslide was coined. According to legend, it was originally called the Sunny Slope Slide Stacker, a mouth full, then evolved into the Beaverhead County Slide Stacker, not much better. Then the name was condensed to: Beaverslide.

Stacking hay has always been problematic, requiring a lot of time, labor and horsepower to accomplish. Prior methods evolved from the simple pitchfork, to machinery, including 2 and 4-pole derricks and over-shots. All had inherent problems either with transport to a new location, or had real safety issues.

Mowing machines have been around for quite a while, relieving people the drudgery of cutting a crop with a scythe and raking the hay into windrows by hand. In the days of 2- and 4-pole derricks, buckrakes hadn’t been invented yet, and the hay was brought to the derrick by wagons, or modified wagons called hay boats, that were low clearance. A net was placed into the wagon box, resting on the bottom. A two man crew would go out, one would drive the team, the other would pitch the hay. When they got back to the derrick, the net would be wrapped around the cargo and attached to a boom or cable system, and the load lifted onto the stack. The invention of the buckrake alleviated a lot of physical labor, and was much faster, even with the original horse-powered ones.

Because there was a lot of timber in the region, the original beaverslides were made of logs and boards. This one is steel, but mounted on wooden skids so it can be moved readily. Once ranchers started using them, they invented several accessories such as side-wings that fold against the slide when being transported. Once set up they are swung around and fastened to another accessory: the backstop, so there is a “cage” created to form the stack in. When the stack reaches the height desired, a couple of people climb up and “top it off” by filling in any holes, and rounding the top so it will shed water. Beaverslides seem to be about 22-ft tall at the throat, so stacks are usually about 30-ft. tall when completed.

Equipment used, some of which is home-made: Mowers or swathers to cut the hay. Hay rakes of various types. A hoist to pull the basket up the beaverslide, which is usually a converted truck chassis or purpose-built and dedicated hoist fitted with a cable drum. Buckrakes are made from a truck chassis that has been reversed and fitted with a “basket” to push the hay.

Reviewing the entire process: the hay is cut using mowers or swathers and left to sun-cure a few days. A buckrake then brings loads of hay to the beaverslide and pushes it onto the basket. The hoist operator then engages the hoist to take the load up to the top of the stack. Meanwhile, rakers are picking up any hay that has escaped and return it to a windrow to be picked up by a buckrake during another pass.

It is a simple system and most of the equipment can be repaired quickly in the field.

The bottom picture shows the beaverslide and backstop hooked together for transport. The wings are folded back and secured, and the entire set-up is towed to the next stackyard. It only takes a few minutes to take-down and set-up.

There are several videos on line that demonstrate the operation. Unfortunately, most of the older generation portrayed in this documentary below are now gone: 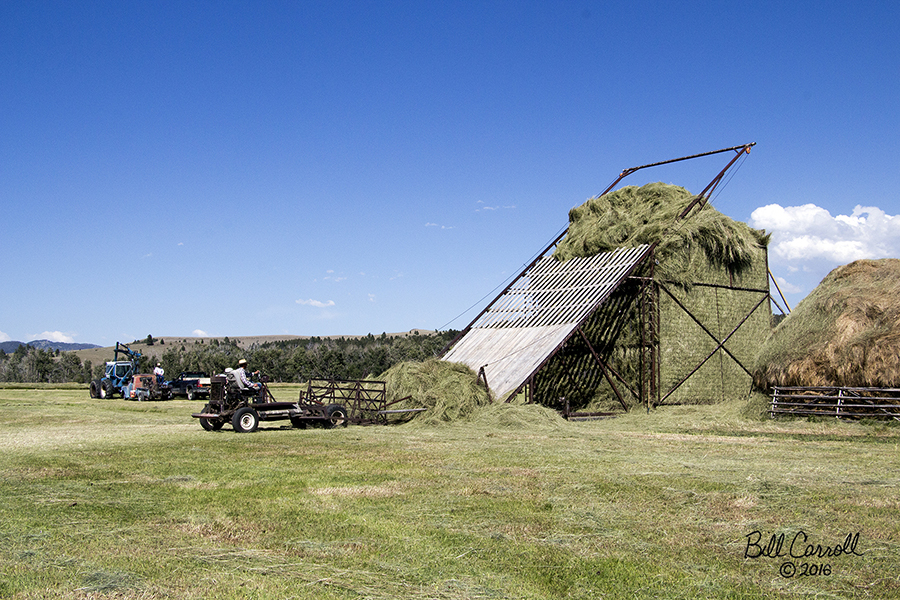 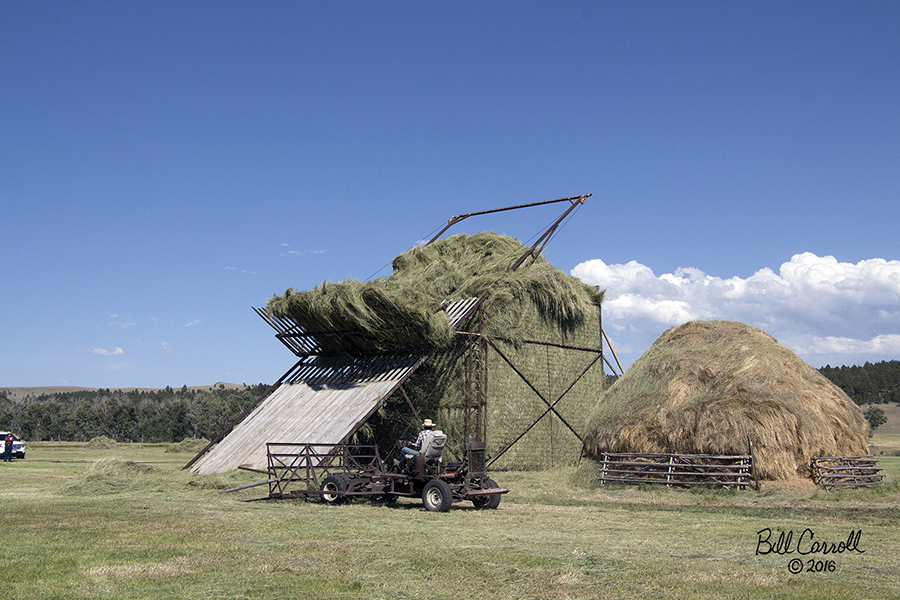 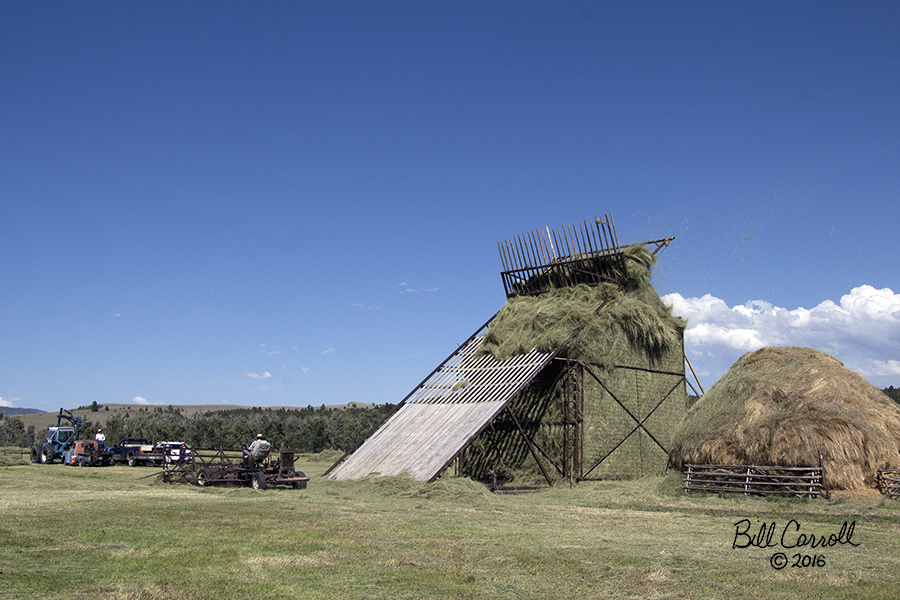 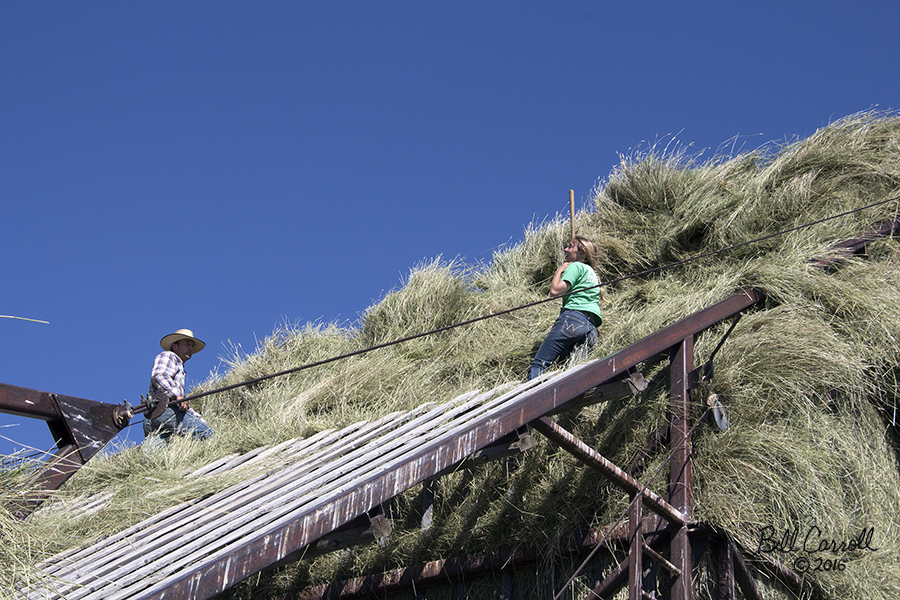 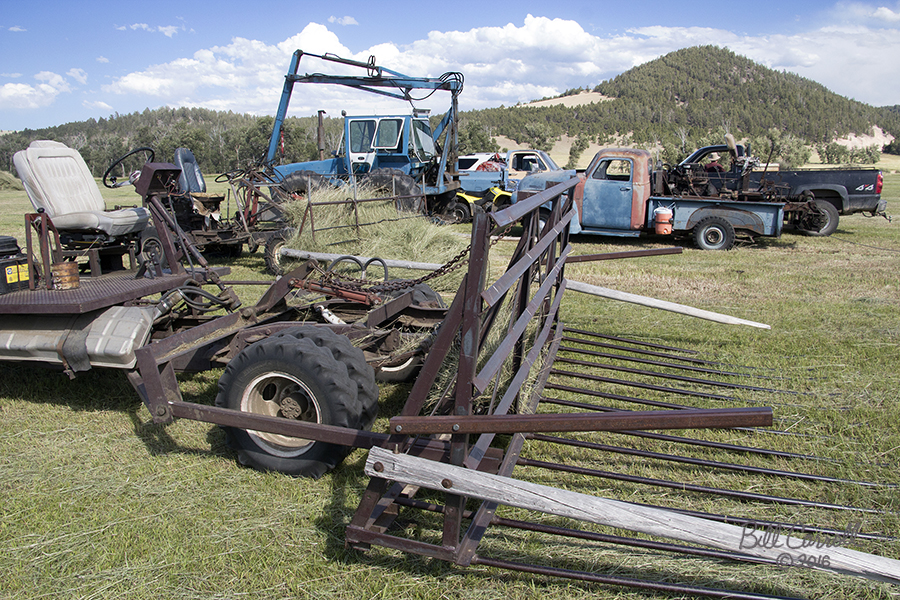 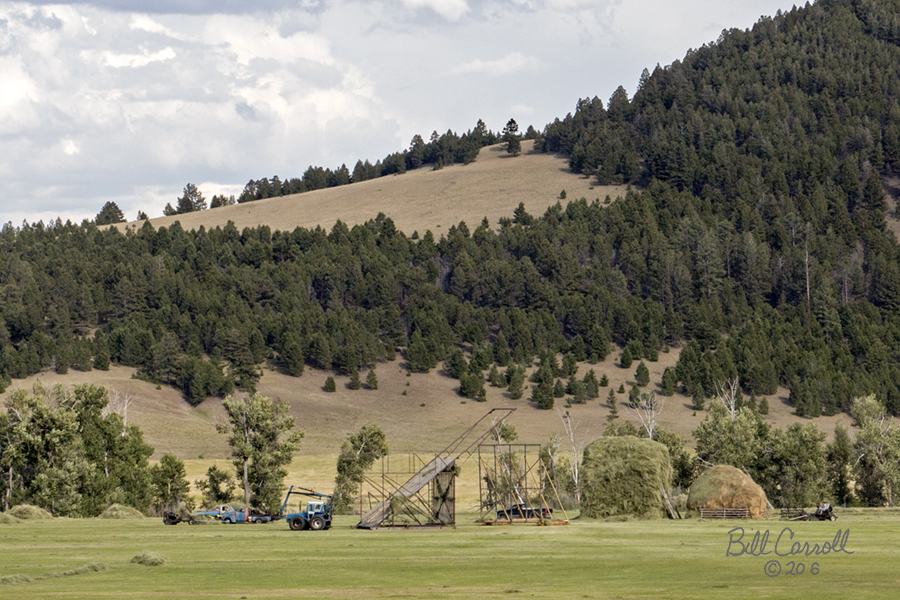