I’ve gotten a lot of questions about the kilns and smelter at Glendale, MT.

The Canyon Creek Kilns produced charcoal to fire the smelters. There is no coal in the area, and wood wouldn’t produce enough heat, so they made charcoal either in a kiln, or in pits. Kilns were preferred because air going into the fire could be controlled. Charcoal is produced when wood is burned in absence of oxygen and since charcoal is almost pure carbon, much higher temperatures could be produced at the smelter, I’ve heard in the 3000 degree range. The kilns were loaded and fired, and then the kiln door and window were sealed. The color of smoke told the operators what was going on inside. The air was then fine-tuned by either placing or removing bricks in the rectangular holes around the base. Kilns took a day to load with some 35 cords of wood stacked in a prescribed manner. Then another 13 days to fire and a day to unload the approximately 1,700-bu. produced. Then they would haul the charcoal to Glendale where the smelter was located.

This is about all that remains of the smelter at Glendale. The stack and company office: 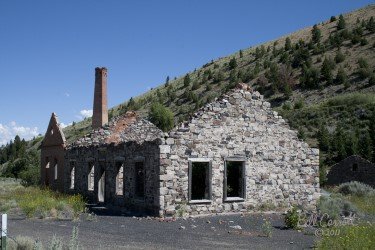 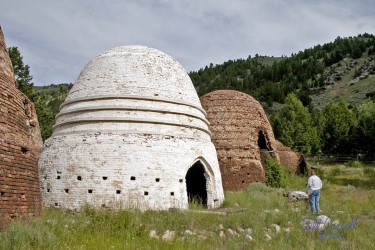